Wieden + Kennedy kicks of Converse’s larger SP19 campaign and it does it honoring creative women.

Converse has always been a successful brand within a young and underground audience, not needing much of an effort to attract the ‘grunge-like’ to their canvas-made Chuck Taylor. In “Spark progress” they don’t defraud them.

Setting ground on key places around London (like Hackney or Peckham) and adding to the mix an analog aesthetic full of colour, music and grain, the recipe it’s just made for success. Was there anything to be exploited within their radar? Yes it was, and they have covered it too.

During the last years we have seen arise the voices of women around the globe, and although the rise of the feminism and the empowerment of women has political roots, the movements have developed into more notorious phases within the creative industries and even, yes, let’s say it, trends within advertisement. We’ll have to agree on this: women are now very popular characters, which is why every day more brands are recurring to women voices to tell their stories. While this doesn’t mean the fight is over, it does mean that messages of feminism are being sold and used for selling.

Although I am not accusing Converse of using women as a tool of selling taking advantage of the time we live in, I am pointing at the fact that they too have decided to recur to female narrators of their story. In this case, the London based agency has chosen Ama Lou (Singer-songwriter), Raye (Pop artist), Lava La Rue (skater), Feng Chen Wang (Chinese-born fashion designer) and Paria Farzaneh (Iranian menswear designer).

All 5 women have taken part in the creation of this ad, whether this is just a a campaign following a particular trend or a genuine movement of support to creative women, the truth is that their narrative and visuals are just impeccable.
In conclusion: An instagrammable #analogue-vibes video. If you have ever enjoyed a walk around the Columbia Road Flower Market in London, you are going to want a pair of Converse.

McCafe mocks every other coffee ad by replicating it

Mocking a comptetitor is not new, Samsung has done it before, but mocking all of them… it is a great way to pull a few smiles while taking advantage of all the formats that actually worked for other brands before yours.

McDonall’s UK has used this technique for his last McCafe ad from Leo Burnett London.

This ad is a call against pretentiousness, McDonald’s say, a push for simplicity.

What is clear is that it’s wrapped in a fun narrative and I think it works well, however, I believe mocking competitors always puts your brand at risk of exposing your flaws and fears. Is that something McDonald’s is going to worry about? Surely not.

Nextflix has dropped a new excellent campaign and it shouts diversity

“This is not a moment, this is a movement” said the young Caleb McLaughlin (a.k.a. Lucas, from Stranger Things) as the lead, and only voice, of the ad Netflix launched earlier this year.

Back then, Netflix promoted Black creators, actors and actresses. 47 to be exact, from those 20 productions within the streaming selection of the giant. A wonderful minute of well, and less, known faces with a beautiful photography and inspiring narration that precedes what today is a new message for diversity.

That’s right, because after their moving A good day in Hollywood, Netflix has launched a new campaign that aim to inspire by asking to “make room” for others.

By asking for inclusion and diversity, the creators of this new ad, Red & Co, are not restricting their request to breaking the boundaries within gender and race in the film industry, but they’re also asking to increase creativity, to open frontiers to new stories and ideas. “We wanted everyone to think more deeply about why diversity is good, beyond the obvious representation issues,” said one of the female founded Agency, Mira Kaddoura.

What a powerful way to inspire, and especially to quietly say: Hey, we’re the ones making room, why don’t you sign up

“This is not a moment, this is a movement”

Caleb McLaughlin in A Good Day for Hollywood

After facing legal issues over the use of “LDNR”, Nike has pulled off their latest “UK focused” ad;  a brilliant 3 minute piece called “Nothing beats a Londoner”.

Back in 2015 Joanna Turner, Sarah Donnelly and Donna Harris created their own company  under the name of LNDR . This East London brand creates minimal and beautifully thought activewear and although Nike slipped their existence when poorly deciding to use “LDNR” as a new targeting concept, the uk brand did not slip, and they went into court, winning, against the huge corporation which has forced Nike to pull the well made advert.

It is, however, a brilliant piece of advertisement. It combines fun, emotion and local expression through music, acting and location. It has everything to make you enjoy those three minutes of ad-feeding.   “Nothing beats a Londoner” is extremely relatable.

Wait, is it? While Nike’s attempt to target a local audience within the UK, they’ve pointed at everyone from Peckham to Kensington, but what about those outside London? The critiques over the ad have focused on the centrism of the corporation leaving outside the vast majority of a young audience that does not feel they are being represented.

That is what people have criticised about the ad within the UK, however, in my personal opinion: they made it right. In a time when most of the brands are impatiently trying to reach full diversity, Nike did a great job including all genders, types and statuses that represent London. It is not the whole UK? Well, we have to be fair, it is a 3 minute ad. Let’s recognise the efforts and do not be upset if they did not call your exact name when trying to sell their trends.

That is a great packaging, @Oatly

I have been drinking this oats drink for over a year now and, honestly, the very first time I went for it attracted by its packaging. I knew I did not like Soya Milk and I new I wanted to reduce mi animal product consumption. From all the choices this one captured my attention.
As a designer I do love its packaging, as a customer I am really pleased with its content. It is the best I have tried so far, specially compared to other brands that presume to be as healthy and they hide numerous unhealthy components.

That is why I believe this is an smart packaging (developed by Forsman & Bodenfors), because from its colours, intelligently chosen, the inspire raw materials, nature and trust. Whether you read the ingredients or you don’t, you have a first sense of pureness.

But the greatest part is that, once you try Oatly, the packaging makes even more sense. 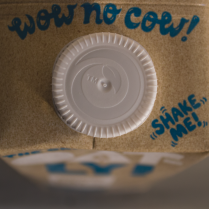 Clearly mocking Apple’s iPhone X, Samsung have released their last ad and everyone is talking about it.

In its new campaign the huge corporation suggests a clear win for their own.

We are talking about a minute of vintage fun. Every iPhone user will be able to relate and have a little bit of fun watching the troubles of this main character on his adventure with iPhone. However, by the end of the movie differences might appear.
Personally, I am an iPhone user and, although I can see what Samsung is trying to point out, I do not agree entirely. Also, funnily enough, there is no mention to any battery explosions.

What it is obvious here is that Samsung is asking you to change sides and convince you that their product is better. But, making fun of your competitors and pointing out their flaws forgetting your own mistakes as a marketing campaign, is it the right move?

Take it or leave it, but the ad is fun, and the retro aesthetics work.

I am wondering what Google has to say about this. .

** Note: The video was deleted. Updated video below**